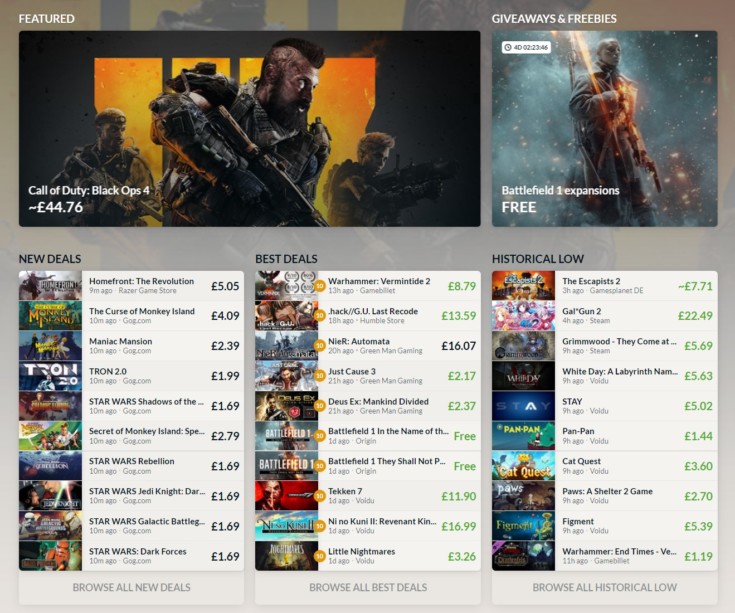 It’s been a long time since we launched Salenauts. For most of this time website just worked and did not get any major updates. But in fact, for a long time, we’ve been working on a big update with many changes and improvements. There were so many new ideas and improvements, that a completely new website was created – GG.deals.

It was a long road (maybe too long). The service has undergone fundamental changes, both in terms of code architecture and frontend layout. The price handling has been completely revised to improve performance and streamline other processes. After refactoring of the code and a partial migration from Yii 1 to Yii 2, not much was left of the original code. Some changes entailed another – a dedicated system for handling queues or a system for automatic scaling and cropping images are just some of them. Actually, except for a few components and CRUD in the admin panel, the rest is new or after a complete facelift.

There are also a lot of new features, such as separating alerts (which now gives much more possibilities) from the wishlist, more info about the game (such as screenshots, description or more ratings), or the ability to save custom queries for filters (which also have been significantly improved). The entire frontend has been completely redesigned with features and effects that I would never come up with. In this case, credits go to Łukasz, who with unearthly patience implemented all UXs ideas and implemented subsequent iterations of the layout. We are constantly working on improvements, but even now the effect is impressive if we compare it with the ascetic look of Salenauts.

And finally – forum. We decided to throw away the MyBB engine, which has been architecturally stuck at the beginning of this millennium (work on MyBB 2.0 has been suspended, so probably it will always remain so). The choice fell on Flarum, which differs from standard forums both in terms of interface (it represents the trend of continuous scrolling of the topic probably initiated by Discourse) and internal architecture (finally main engine is a dependency, and flexible plugins API allows to extend its functionality by extensions, all managed by Composer). It’s still a beta, you can still see that some functionalities are missing, but it works pretty well, and the navigation through the forum is very simple and fast.

You can find more details in news on GG.deals. If you have any ideas, fell free to post them on forum.

2 responses to “Salenauts evolved into GG.deals”